Esther García-Tuñón (PI) is an UKRI Future Leaders Fellow and Senior Lecturer in Materials Science and Engineering in the Department of Mechanical, Materials and Aerospace Engineering (School of Engineering) and the Materials Innovation Factory at the University of Liverpool.

Esther completed her degree in Chemical Engineering and a PhD in Materials Science from the University of Santiago de Compostela, Galicia (Spain). She moved to the UK to join the Centre for Advanced Structural Ceramics (CASC) at Imperial College London with a Barrie de la Maza fellowship, in October 2011. After six years as a postdoctoral researcher at Imperial, Esther joined the University of Liverpool in 2017 as a Lecturer in Materials Science and Engineering affiliated to the Materials Innovation Factory (MIF) and the School of Engineering. She was awarded an UKRI Future Leaders Fellowship in 2021. Esther is a committee member of the RSC / SCI Joint Colloids Group: http://www.colloidsgroup.org.uk/.

Esther is also a mother of two wonderful boys, and is expecting a third! She loves spending time outdoors and by the sea with her family and friends, practicing yoga and other movement forms like Tai Chi, swimming and bouldering.

Her research aims to develop novel processing techniques to bridge the gap between materials discovery and manufacturing; to design and understand the behaviour of complex yield stress fluids for 3D printing applications; and to create hierarchical structures for health and energy applications, such as cartilage repair and water splitting.

Sean received an Opportunity & Achievement Scholarship to study Chemistry with research in industry (MChem) at the University of Liverpool, graduating with first class honours in July 2014. This included a 12-month industrial placement at INEOS where he worked on the development of polymeric additives for the suspension PVC process. Sean returned to the University of Liverpool to complete his MChem research project on the role of end-group hydrophobicity on the performance of branched copolymer surfactants as oil-in-water emulsifiers. Sean went on undertake his PhD (2015-2019) under the supervision of Professor Steve Rannard; his doctoral research focused on the optimisation of branched vinyl copolymer nanoparticles for controlled release of hydrophobic chemotherapeutics. Sean was awarded a prestigious John Lennon Memorial Scholarship during this time. After completing his doctoral studies, Sean was appointed as a postdoctoral research associate (PDRA) at the University of Liverpool to work on the development of Transfer-dominated Branching Radical Telomerisation (TBRT), a new synthetic platform for the preparation of hyper-branched polyesters using radical telomerisation chemistries. In October 2022, Sean joined the research group of Dr Esther García-Tuñón as a PDRA to work on the design and synthesis of branched copolymer surfactants for the preparation pH-responsive yield stress fluids for 3D printing applications.

Rishav received his bachelor’s and master’s degrees in Chemical Engineering from IIT Kanpur, India in 2015. His master’s thesis was on theoretical study of electrohydrodynamic instability of confined viscoelastic liquid jets. After masters, he went to work as a management trainee in a chemical company Galaxy Surfactants Ltd. (Mumbai, India) between 2015 – 2016. After about a year of working there, he decided to pursue higher studies. In 2016, he moved to UK for his PhD at the University of Liverpool under the supervision of Prof Robert J. Poole and Dr David J. C. Dennis. There he studied transitional and turbulent flows using advanced laser- and thermal-based flow diagnostic tools. After completing his PhD in 2020, he moved to Coventry University to do his postdoc in experimental investigation of geophysical flows, working under Prof Alban Potherat. This project involved designing and carrying out experiment to visualize rotating magnetoconvective patterns in order to better understand the flow in the Earth’s core.

Since August 2022, Rishav is working as a PDRA in Tuñón group at the University of Liverpool. Here he is working on a UKRI FLF project (awarded to Esther García-Tuñón) to develop new bulk and micro rheology techniques to obtain a fundamental understanding of yield stress fluids. This fundamental research will pave the way for the application of yield stress fluids in Direct Ink Writing to create complex multi-material structures, which have key applications in both healthcare and energy.

Francesca Miricola gained her 1st class MS in Biotechnology at the University of Pavia. After her industry experience as a formulation scientist in a personal care products company, she decided to move back to academia and pursue a PhD in the School of Engineering at University of Liverpool in 2019. With this background, she is now working on optimizing characterisation protocols for personal care products by combining microfluidics and advanced imaging techniques, partly funded by Unilever. She travelled and lived in a few countries before getting to the group, while learning new languages and perfecting her scientific background. She has a passion for the cosmetic field and shares her knowledge through her scicomm project, while she advocates for equality, inside and outside science.

Naïma Saadi took the decision to change her path from social sciences to engineering and did not look back, receiving her degree in Mechanical Engineering from the University of Liverpool in 2019. The skills she picked up from her social science background did not go unused however and her love of research is a testament to that. Her PhD, “Multiscale Quasiperiodic Metamaterials”, embodies the curiosities she has for physics, materials and 3D-printing. The focus of her degree will be the additive manufacturing of aperiodic structures that can manipulate the path of EM waves and more recently how these complex structures deform. An interdisciplinary degree suits her well as she would describe herself as having a creative world view. She is an avid music lover, has travelled to 19 countries, enjoys baking and remains an active person (to stave off the baked goods). And of course, the occasional spot of nail art to brighten the mood.

Bin Ling joined Tuñón‘s group in November 2020, as a PhD candidate in mechanical engineering. His PhD project aims to bring newly discovered materials into additive manufacturing for energy and environmental applications. He collaborates with the Cooper group in the Materials Innovation Factory. Bin obtained his master degree at Hunan University in China in July 2020 under the supervision of Prof. Kai Wei. During his master studies, he was involved in the 3D printing of cellular metamaterials/structures. In his leisure time, he enjoys fitness, badminton, swimming, reading, and photography.

Emma Jones achieved her 1st class MChem at the University of Liverpool before crossing campus to join the Tuñón Group in the School of Engineering. Her PhD is entitled “Designing Assemblers for Bottom-Up Formulations with Tunable Rheology” and is partly funded by the Leverhulme Centre for Functional Materials Design. Her research interests mirror her interdisciplinary PhD and span the breadth of polymer chemistry, formulation engineering and colloidal processing. Nevertheless, she is a chemist at heart with a soft spot for colourful reactions and enjoys incorporating extraneous dyes into her work purely for the aesthetic. One day, she will own either a retirement home for cats and dogs or a popular science magazine.

Seyed Mostafa Latifi is doing a PhD between UoL and NTHU (Taiwan). With a Computer Engineering background, Seyed is working on direct ink writing of semiconductors to create passive devices for THz applications. He soon will be moving to Taiwan to work with his supervisor in NTHU, Prof Shang-Hua Yang, in the simulation and testing of novel 3D waveguides.

Alice Brettle is a PhD student it the Engineering Department of the University of Liverpool. She completed her Bachelors degree in Mechanical Engineering at Heriot Watt University, and in 2017 graduated from Trinity College, Dublin with a postgraduate Masters degree in Bioengineering, specialising in medical device design. Alice is part of the CDT based at Nottingham, and her project is part funded by EPSRC, as well as generous donations in memory of a Labrador called Lucky. Her research is centred around Canine Elbow Dysplasia, involving investigations into the efficacy of various current surgical treatments and the derivation of mathematical models to predict the outcomes of new treatments. The aim of Alice’s PhD is to utilise additive manufacturing to design and test a new method of treating Canine Elbow Dysplasia. 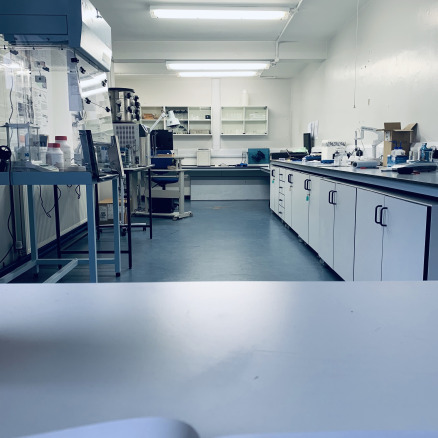 Our lab in the Chem Dept at UoL